Let’s zoom in on the United States for a moment.

According to Public Agenda, America’s Hidden Common Ground on Police Reform and Racism in the United States,

“Nearly all Americans across the political spectrum and across racial/ethnic groups support officers wearing and using body cameras (94% of Republicans, 91% of Democrats, and 86% of Independents; 92% of white Americans, 87% of Black Americans, 88% of Hispanic Americans).”

The driving force behind these statistics is a desire to know the truth about what really happens during these exchanges.

Without evidence of how authority is exercised, people are left to narrate their own version of the story, often contributing to stigma and cycles of hate in the process. 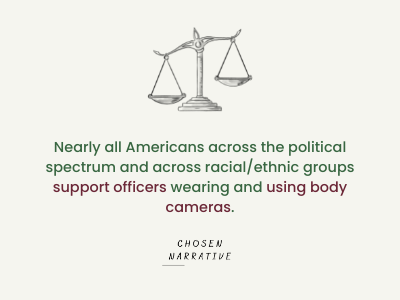 The Marshall Project produces non-profit journalism that is committed to demystifying the American criminal justice system. We’ll be sharing more about this incredible organisation in posts to come…

Call to donate to The Marshall Project!

At Chosen Narrative, we believe in the powerful potential that journalism can have on educating the public and driving reform in the criminal justice system.

We respect the Marshall Project’s fair, transparent and humane approach to journalism and their obvious commitment to reform. That’s why we contribute a small amount each month to help The Marshall Project tell stories that matter.

We encourage you to donate to the nonprofit journalism which “establishes facts, exposes failures and examines solutions for a criminal justice system in crisis”.